Clean Energy Soared in the U.S. in 2017 Due to Economics, Policy and Technology

President Trump rolled out the antiquated arguments about why clean energy was too expensive and a threat to the grid. But markets and policies mostly ignored him.

Renewables are already the cheaper option in many places. The costs of new solar photovoltaics have come down by 70 percent since 2010, according to the International Energy Agency. Credit: David McNew/Getty Images

As President Donald Trump [1] moved to roll back environmental protections and foster a boom in fossil fuel energy production, his administration effectively abandoned the race for global leadership in slowing global warming.

But in many ways, the transformation of the energy economy in a new, green direction continued apace in the United States, just as abroad.

Some pre-Trump policies, like U.S. tax breaks for renewables, survived. The social and market forces that have been shouldering coal aside persisted. And the mantle of leadership passed not only to Europe, China and developing nations, but to American cities and states.

The cost of renewable energy keeps going down, comparing favorably with coal. Battery technology also continues to improve and get cheaper. And digital technology is making electric markets cleaner and more efficient, as well.

Here are how these trends are emerging, both in the United States and abroad. 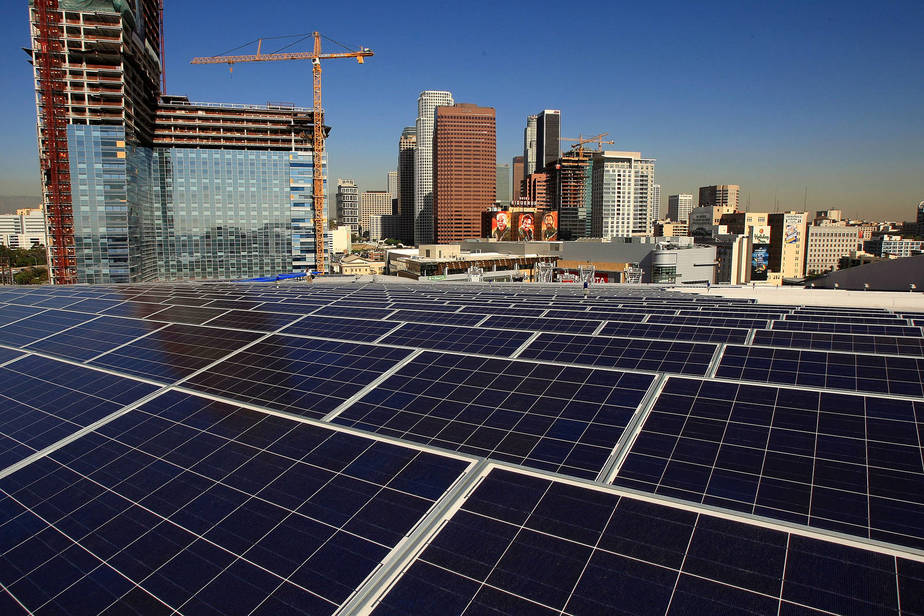 Trump famously promised to bring back coal, and he’s been trying. At the U.N. climate conference in Bonn in November, the only official U.S. event promoted “clean” fossil fuels [3] as a solution to climate change [4]. Trump’s proposed rollback of the Clean Power Plan [5] would retract stringent limits on emissions from coal plants. Energy secretary Rick Perry [6]told the Federal Energy Regulatory Commission to “fix” grid resiliency by requiring some power plants to maintain larger on-site reserves of coal and nuclear fuel [7]—a strategy widely derided [8].

Signs of coal’s demise are everywhere. More than half of the coal plants in the United States have closed since 2010 [9], and coal’s market share continues to decline rapidly, according to a new report from UK-based Carbon Tracker [10], an independent financial think tank. It concludes that “new coal capacity is not remotely competitive” and, in the next few years, building new power plants that use natural gas and renewables will often be cheaper than continuing to operate existing coal plants.

The economics are just as unfavorable for coal in Europe. Another recent report from Carbon Tracker found more than half of coal plants there are losing money [11]. By 2030, almost all will be, thanks to tougher air pollution protections and higher carbon prices. Soon it will be cheaper to build new solar and wind generation than to continue running existing coal plants, the report found. The United Kingdom has slashed its coal usage from 40 percent of the nation’s electricity to 2 percent [12] in the last five years. Australia [13] and China [14] are also among the countries that shut down coal plants or canceled plans for new ones.

More and more places around the world, including China and India, are deciding that air pollution impacts on human health must be controlled [15], requiring costly scrubbers and filters that increase the cost of coal generation. At the same time, prices for other energy sources have stayed low—including  natural gas due to copious fracking [16] in the United States, and wind and solar, which are continuing their steep decline due to economies of scale and technological improvements.

Even the International Energy Agency (IEA), known for its myopic view of fossil fuels and routine underestimates of renewable energy growth, discerns this trend. Renewable energy’s “explosive growth in the power sector marks the end of the boom years for coal,” says its latest World Energy Outlook, predicting that renewables will capture two-thirds of global investment and generate 40 percent of total power in 2040 “as they become, for many countries, the least-cost source of new generation.”

Renewables Are Competing on Price

In fact, renewables are already the cheaper option in many places. The IEA’s 2017 Energy Outlook [17] notes that, since 2010, costs of new solar PV have come down by 70 percent and wind by 25 percent. And China’s energy agency announced last January that it intends to spend at least $360 billion on renewable energy by 2020 [18]. It’s that kind of investment that is helping to bring prices down worldwide.

These prices are turning heads. In 2016, renewable energy accounted for almost two-thirds of new power capacity globally, and this was another record year [23]. The IEA expects that domination to continue, at least through 2022 [23]. That’s true in the United States as well. Renewables have been the majority of added capacity since 2014 [24], despite this year’s solar dramas such as lobbying for tariffs on cheaper Chinese panels [25] and industry shakeups [26].

U.S. wind and solar also emerged only lightly scratched [27] by the Republican tax cut, after tax credits were in the crosshairs. Republicans buckled under pressure from red states like Texas, where a new wind facility that opened in December pushed the state’s wind capacity past coal [28].

Aside from what happens at the federal level, states continued with their strong commitments. For example, California’s Public Utilities Commission reported [29] that it is well ahead of its target to get 33 percent of its power from renewables by 2020 and appears on track to meet the 2030 target of 50 percent  by 2020. Gov. Jerry Brown, seizing on that momentum, is now advocating that the state hit 100 percent by 2040 [30].

Renewables’ strong growth demands more energy storage to avoid dumping wind and solar power that can’t be used immediately, and regulators are increasingly aware of storage’s value in supporting the modern grid. It helps that adding storage is now more feasible because battery prices have come down by 40 percent since 2010, according to the IEA’s 2017 Energy Outlook [17]. Water storage via pumped hydro and regulated dam use are also supporting wind and solar, along with “virtual storage” such as demand response.

Lithium-ion batteries used for grid storage, vehicles and home storage have been getting incrementally better and cheaper, both from economies of scale and technological  advances [31].  Meanwhile, innovation continues [32]in other battery technologies [33]. The progress  led to a flurry of new electric vehicles and manufacturer and country commitments [34] to phasing out internal combustion engines. Even trucking is beginning to go electric [35].

A report from Bloomberg New Energy Finance [36] predicted in November that the energy storage market will double six times between 2016 and 2030. This boom will mirror solar’s rise from 2000 to 2015, the report said, in which the share of solar as a percentage of energy generation doubled seven times. In the U.S., states are following California’s lead, which first set a storage target in 2013. Now 21 states have storage targets or are planning projects [37].

Lithium-ion batteries are even beginning to compete on price with natural gas peaker plants, the older, dirtier power plants that currently supply electricity when demand spikes. This month the California Public Utilities Commission is set to vote [38] on a plan to replace three natural gas-fired power plants [39] with energy storage. Experts say this could be the beginning of the end for peaker plants.

As solar, wind, storage, and other new energy resources such as electric vehicles and smart appliances come onto the grid, supply is more variable and transactions—moving and paying for energy—are going in both directions. These changes make grid management and the delivery of reliable electricity challenging.

Increasingly, grid managers are using vast reams of data; powerful analytics, including machine learning; and widespread connectivity, including machine-to-machine communication to make energy systems more flexible, efficient, and reliable, a trend the IEA covered in a special report on digitalization and energy [40].

These systems can optimize myriad variables in real time. For example, they can store solar power generated in the afternoon for later use when people get home from work, or they can send wind power from the desert to the city, or they can shave tiny amounts of electricity delivery from multiple customers [41] via their smart appliances, aggregating enough to not turn on a peaker plant. The IEA report found that [40], by 2040, demand response could provide 185 gigawatts of system flexibility, roughly equivalent to the supply capacity of Australia and Italy combined, saving $270 billion in new electricity infrastructure.

Electric vehicles’ batteries can be used as storage for the grid [42], and energy digitalization can shift cars’ charging to times when electricity demand is low and supply is high. Doing so could save $100 billion to $280 billion in avoided investment in new electricity infrastructure between 2016 and 2040, according to the IEA report. Improving analytics and AI can also create more accurate forecasts for wind and solar, allow grid managers to better capture that energy and reduce fossil fuel use.

This is the future of energy, and it’s coming much faster than conventional wisdom predicted. Deals between data and artificial intelligence startups and energy companies increased 10-fold in 2017 [43], according to accountancy firm BDO. Altogether, these policies, technologies, and markets are overcoming hurdles to new types of greener energy—solar, wind, storage, efficiency—decreasing greenhouse gas emissions from electricity.

It may prove impossible for those who favor fossil fuels to turn back the gears of progress.

Get Charged Up
Recent Posts

Let’s connect.
Find out about our next event!
© 2018-19 Get Charged Up. All Rights Reserved | KHD
Contact Us

We're not around right now. But you can send us an email and we'll get back to you, asap.